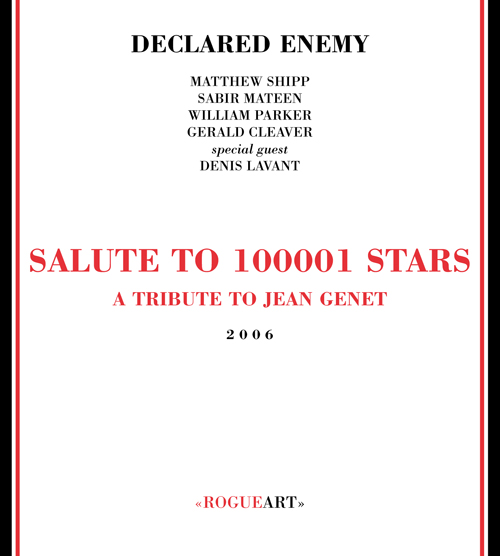 The poem "Marche Funèbre" and the text "Le Rouge et le Noir" are by Jean Genet; all the compositions are by Matthew Shipp

It was by chance, during his short stay in Paris in 2000, that Matthew Shipp came across Rajak Ohanian's photograph of Jean Genet. He instantly recognized the writer, saying "Our Lady of The Flowers is one of my favourite books." And that's how it all started. Four years later, he brought together Sabeer Mateen, William Parker and Gerald Cleaver to express what Genet meant to him. Then, Denis Lavant joined them to add Genet's words to the project.
In his lifetime, Jean Genet had no real connections with Jazz but he did share with past and present Jazz inventors the same source of inspiration: the life of the underdogs.
From yesterday's slavery to today's prisons and ghettos, Afro-Americans know too what confinement means.
Just like Genet's works are a menace to the Establishment, Jazz always gets out of the clutches of any force in power, despite so many takeover attempts.
And it so happens that Jean Genet's path crosses the ones of Matthew Shipp, Sabir Mateen, William Parker, Gerald Cleaver or Denis Lavant.
Therefore, Declared Enemy's music can eventually meet Genet's works. A dialog takes place between music and words, fierce or tactful, always respectful, never complacent.
The recording took place on a December the 19th. Nobody knew it was Jean Genet's birthday.
There is no such thing as chance. Michel Dorbon