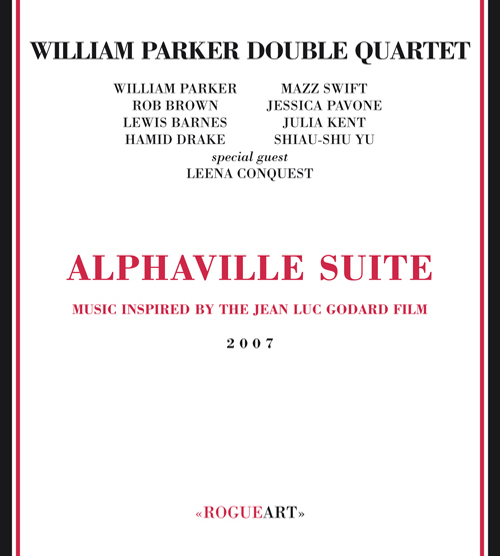 “It has always been William Parker’s dream write to a piece of music inspired by this great film; it is now done!”

All compositions by William Parker

I first saw Jean Luc Godard’s Alphaville on American television in the early 1970’s. It didn’t take long for me to realize that Alphaville wasn’t just another science fiction spy thriller; it was really a wake up call to modern society to be vigilant…
…It has always been my dream write to a piece of music inspired by this great film. The plan was to have a double quartet, one quartet made up of strings (Julia Kent, and Shiau-Shu Yu cello, Jessica Pavone viola, and Mazz Swift violin). The other quartet is the regular working band of Rob Brown, alto sax, Lewis Barnes, trumpet and Hamid Drake, drums. I read the films screenplay and bought the DVD of the film to refresh my memory.
Then I began to write the music, ending up with 15 compositions each one capturing a different aspect of the movie. The concept was to create an alternative soundtrack that could possibly be used in the film. While at the same time have a life of it’s own as concert music. Due to time restraints we only could record about half the music. Eight musicians blending as one while at the same time not giving up their individuality.